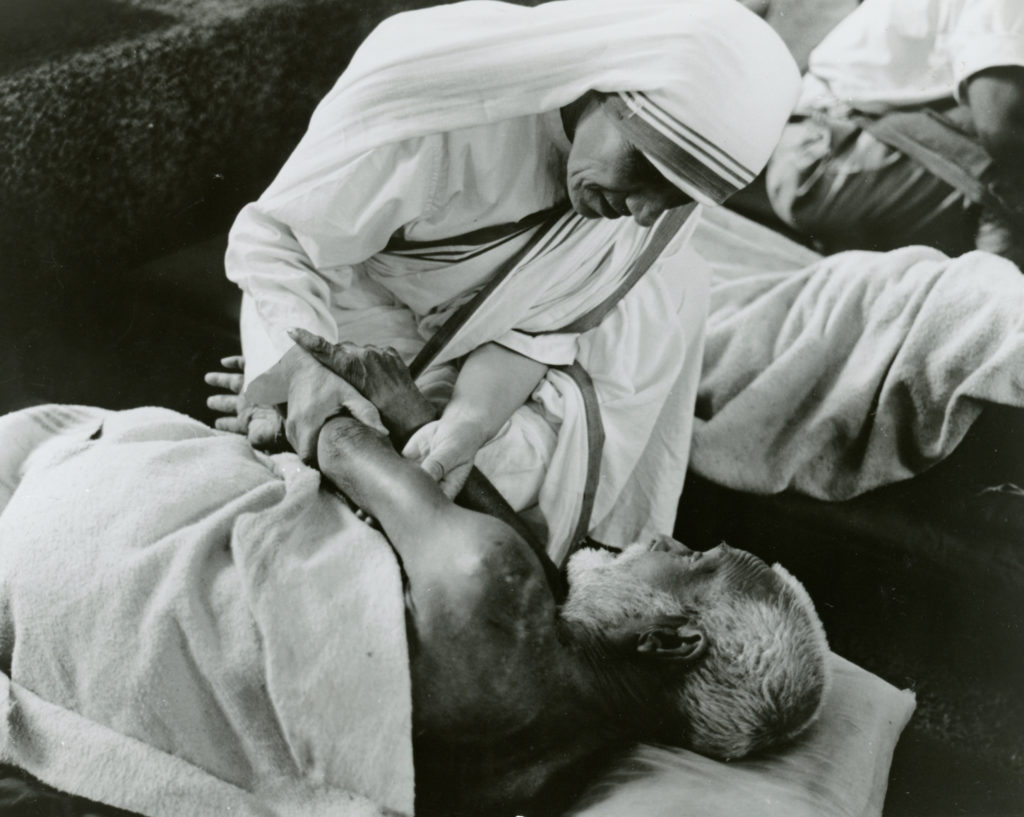 Blessed Teresa of Kolkata cares for a sick man in an undated photo. (CNS photo/KNA)

In this Jubilee Year of Mercy proclaimed by Pope Francis, we are reminded of God’s gift of mercy to us, and our call to share his tender love and compassion with others. It is fitting then that “Moved by Mercy” is the theme for Respect Life Sunday today and the entire month of October.

As we are moved by God’s mercy to undertake the blessed work of caring for one another, and in all our efforts to protect human life and dignity, we have a special patron in Saint Mother Teresa of Calcutta, who was canonized last month. “Mother Teresa, in all aspects of her life,” explained the Holy Father at the Canonization Mass, “was a generous dispenser of divine mercy, making herself available for everyone through her welcome and defense of human life, those unborn and those abandoned and discarded.”

When Mother Teresa spoke here at the National Prayer Breakfast in 1994, she began with a reminder that Jesus calls us to carry out mercy in our world, quoting the Gospel in which the Lord says that those who do this service to the least of us – feeding the hungry, giving drink to the thirsty, visiting the sick – are doing it to him and will be welcomed into God’s kingdom of heaven (Matthew 25:34-45).

As this diminutive yet larger than life nun stood before the assembled, almost hidden by the microphones, her words resonated as a clarion call to respect life in all its stages. “I feel that the greatest destroyer of peace today is abortion,” she said, “because it is a war against the child, a direct killing of the innocent child, murder by the mother herself. And if we accept that a mother can kill even her own child, how can we tell other people not to kill one another?”

That language might seem stark and unsettling, but like a prophet, Mother Teresa was challenging our nation’s leaders and citizens, many of whom call themselves pro-choice, to turn away from the violence of abortion and instead offer a better and more authentically human alternative. “How do we persuade a woman not to have an abortion? As always, we must persuade her with love,” she said.

Mother Teresa noted how her Missionaries of Charity helped thousands of women choose to offer their babies for adoption to loving families. “The child is God’s gift to the family,” she stressed. “Each child is created in the special image and likeness of God for greater things – to love and to be loved.”

As we witness an energized effort by extremist groups, including some who deceitfully label their position as “Catholic,” to expand even further a society of abortion on demand – and to force taxpayers and employers to pay for this evil even against their conscience and liberty – we as a people need to hear Mother Teresa’s words again. “Abortion just leads to more abortion. Any country that accepts abortion is not teaching its people to love, but to use any violence to get what they want,” she emphatically said at the prayer breakfast.

Mother Teresa also spoke of elderly parents spending lonely days in nursing homes, looking toward the door for their family members. She described young people, neglected by busy parents, who turn to drugs for solace. She told of how when her sisters had taken in and cleaned a certain man who was half eaten by worms out of the gutter in Calcutta, he said to them, “I have lived like an animal in the street, but I am going to die as an angel, loved and cared for.”

“We cannot solve all the problems in the world, but let us never bring in the worst problem of all, and that is to destroy love,” said Mother Teresa, adding that that is what happens with abortion, which then fosters greater violence in society.

Today and throughout Respect Life Month, we will lift up the dignity of life that Mother Teresa spoke of, promoting adoption as a loving alternative for mothers in crisis pregnancies, emphasizing post-abortion healing as a bridge of God’s mercy, including the spiritual healing obtained in sacramental reconciliation, encouraging love for the sick and disabled instead of assisted suicide, and protecting our common home where we all live. Also, this coming Friday, October 7, at 10 a.m., you are invited to join in the launch of a special “Youth & Aged for Life” initiative at the Jeanne Jugan Residence administered by the Little Sisters of the Poor.

Our Church’s newest declared saint by her example and her words shows us how we can be channels of God’s love, peace and mercy. “Holiness is not the luxury of the few; it is a simple duty, for you and for me,” she said in her National Prayer Breakfast talk. This saint and this month dedicated to God’s gift of life remind us that respecting life is holy work that we are all called to do.

The Divine Mercy of the Lord

Active Cooperation in the Grace of Forgiveness and Reconciliation

Embracing the Mercy of God during Lent