The Ten Commandments and Pentecost 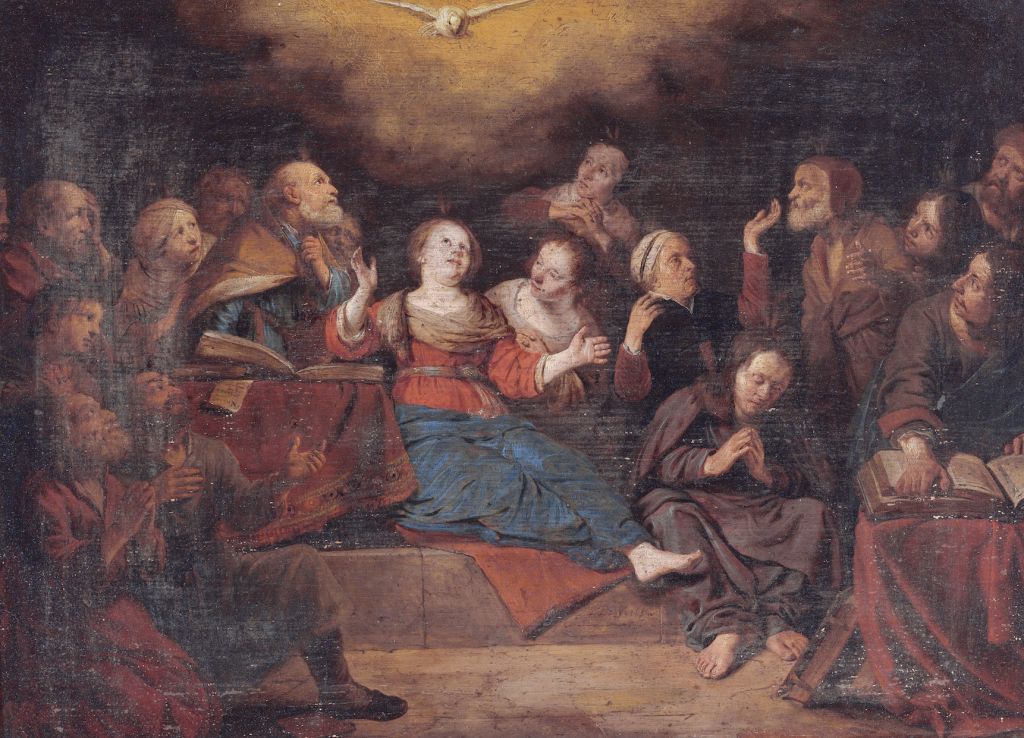 In the Paschal Mystery, we celebrate our redemption and deliverance from slavery to sin and death through Jesus Christ. The context and frame of reference for our appreciation of our salvation begins with the observance of Passover, during which the people Israel recalled how God led them out of bondage in Egypt.

This holy feast, celebrated by Jesus and the Apostles, was followed seven weeks later with Pentecost, which means the “fiftieth” day after Passover. Among the Jews of ancient times, Pentecost served a dual purpose: it was a festival of the first fruits to be offered to God and it also celebrated the giving of the Law to Moses on Mount Sinai.

With the Exodus, the people of Israel were no longer slaves in Egypt, but they were not yet truly free – they remained slaves to sin and falsehood. It is God’s plan that his people be fully free, so it is for this reason that he gave us the Ten Commandments. These are rules which do not limit human freedom, but protect it. “At the same time, they teach us man’s true humanity. They shed light on the essential duties, and so indirectly on the fundamental rights, inherent in the nature of the human person” (CCC 2070).

God created us free and gave us the ability to make choices. At issue is not what we are able to do, but what we ought to do. The commandments, taught Saint John Paul II, “are the first necessary step on the journey towards freedom, its starting-point. ‘The beginning of freedom,’ Saint Augustine writes, ‘is to be free from crimes… such as murder, adultery, fornication, theft, fraud, sacrilege and so forth…’” (Veritatis Splendor, 13).

While we tend to think of the Ten Commandments as carved in stone, they are really an expression of the natural law. We have a human nature and that nature calls forth responses, actions, choices and decisions on our part. Just as birds fly according to the natural physical laws and through their instincts, so human beings through the natural moral order respond to the human condition. The commandments merely make explicit that which the Lord had already placed deep within our human nature. In summary they say to us, as Jesus taught, “Love God and love one another” (cf. Matthew 22:37-40).

The first three commandments speak about our relationship to God. They call us to acknowledge that God exists and that there is only one God. He is our creator. We should have respect for the Lord’s name and honor him, recognizing his holiness and worshiping him at an appropriate time and in a proper way.

The other seven commandments relate us among ourselves. God made us as social beings with an inherent dignity that should be respected in a well-ordered society.

It is evident that we owe respect to those who have given us life and helped us to grow, to learn, to be nurtured and eventually to reach a status where we can stand on our own. It is equally obvious that every one of us has a right to the life that is ours and just as we would not want someone to take our life, we have no right to take the life of another. Likewise, the protection of the communal tie of man and woman and the raising of new life in the family is essential to human society.

Furthermore, one cannot be allowed to take what belongs to someone else, especially when it is the means to sustain their life, if we expect society to flourish. Neither can human community exist for long unless it rests on truth and the confidence it generates. Finally, we are called to recognize that our attitudes and internalized positions are every bit as important as our actions.

As we make our way through life, the Ten Commandments serve as something absolutely essential to our human development and authentic freedom. They are also a promise and sign of the law that would be written in a new and complete way upon the human heart by the Holy Spirit at the definitive Pentecost, fifty days after Christ’s resurrection (Veritatis Splendor, 12). If we pay attention to them and heed the guidance they provide, we are guaranteed a safe outcome to our journey.

The Upper Room at Pentecost and in Our Personal Lives

Our Participation Today in the Mystery of Pentecost